Review: A String of Beads 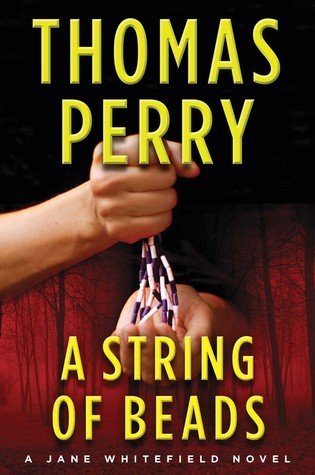 “Jane felt trepidation as she came from the brush on the side of the Southern Tier Expressway. She stood perfectly still for a full minute as she studied the cars in the lanes close to her. She looked in each direction and reassured herself that all the threats were simple and visible. She walked onto the parking lot. Nothing had changed this place since she’d been here twenty years ago. She kept looking ahead for signs of Jimmy.”

Jane goes from being on the road to on the run.

A String of Beads is a thriller with the heroine Jane Whitefield, a half Seneca woman from Amherst, New York.
Thomas Perry’s novel has two storylines, one prominent in the first half, and the other, the thriller, focused on the second half.

Confusingly, the story seems to be about finding an old friend who has disappeared. Clan mothers come to find Jane and ask her to rescue her childhood friend. It is about following a track she walked as a young girl, and about the cultural importance of her task.

“Ellen places the string in Jane’s hand. Jane stared at it – two white, two purple, two white, two purple, the encoded pattern signifying the Seneca people as a nation. Ote-ko-a was often mistaken by the outsiders as a form of money, but ote-ko-a had nothing to do with monetary exchange. It was a sacred commemoration, often a treaty or important agreement. Giving a person a single string of ote-ko-a was also the traditional way for the clan mothers to appoint him to an office or give him an important task.”

It took a while to find out that the search for the friend is not the focus of the story. Soon after Jane sets out on her journey, she is being followed, and her plans change.

“So what’s wrong?”
“There are men getting themselves arrested and put into the Erie County jail system, so they’ll be there when you arrive.”

Jane lets us into her past, into her life before her accident which was in Perry’s earlier work.

“Then you can be one of my runners.”
“Runners?”
“My clients. What I do is help people stay alive. I don’t help them get revenge, or bring them justice, or something. I teach them to run and hide. Are you interested in that?”
“I’ve tried fighting, and that hasn’t worked out too well.”
“Then we better get started.”

And indeed, it gets started!
Thrilling doesn’t begin to describe it. Hiding would be easy compared to what Jane has to do. She has to hide her friend while she finds out who is after him and gets involved with people who are stronger than the police and much more dangerous!

The book was a free Goodreads giveaway copy.