Scroll to Top
Share with your friends or save for later...

When it comes to wedding planning there are a lot of things organised by rote: the dress, the flowers, the ceremony, wedding favours, the first dance. Are all these things for necessity or are we simply following years of wedding traditions?

We breakdown the common wedding traditions to see why we do them. We hope it helps you determine how and to what extend you may want to include them in your own wedding.

Our site sponsor of the month, Bonmarché

Something old, something new

Everyone is familiar with the rhyme: ‘Something old, something new, something borrowed, something blue’. But do you know from when and where it originates and its meaning?

It is an old English saying, dating back to the late 1800s, that would outline what the bride should wear on her wedding day. Each component signifies something different but ultimately provide you with good luck and fortune for your special day:

Is symbolic of fertility and continuity. Traditionally, something old should be an item from within the family given to the bride as a gift to use/wear on her wedding day.

Represents the new phase that you about to embark upon with your partner. Something new encompasses any number of items you’ll have for your wedding day, including your dress, shoes, veil etc.

Is for the superstitious of you. When it comes to something borrowed, you’re looking to borrow something from a couple you know that are happily married, so that perhaps their good fortune can rub off on you.

Offered a dual benefit. It, first and foremost, protected the couple from the Evil Eye- believed to be a curse that would cause misfortune, and secondly, it signifies loyalty and fidelity.

What you may not know is that there was an addition to the poem, added approximately 1900. It now finishes with a sixpence in her shoe. Traditionally, the father of the bride would give his daughter the sixpence which was to sit in her left shoe for good luck and future prosperity.

Although these are the common nuances we’re familiar with today, a lot of the components are derived from traditions that date back to B.C. times. Like most things, they’ve been adapted and altered to the times as the years have gone by.

The insistence that the bride wear white, or some variation of, is something that has only been around for the past 180 years. We appreciate that it is a very long time but don’t feel you need to abide by this tradition for longevity.

White is traditionally symbolic of purity and virginity. Though the majority of people getting married in 2019 and beyond can’t say they tick that box as they walk down the aisle. But the reason white has been a prominent choice for brides for so long is simply down to fashion.

Queen Victoria was our trend-setter here when she decided on a white decorative dress for her wedding in 1840. Admiring her choice, it was the choice for brides in all the years that followed. Prior to that, very few women wore white. In fact, black and rich, bold colours we’re the more popular choice when getting married. 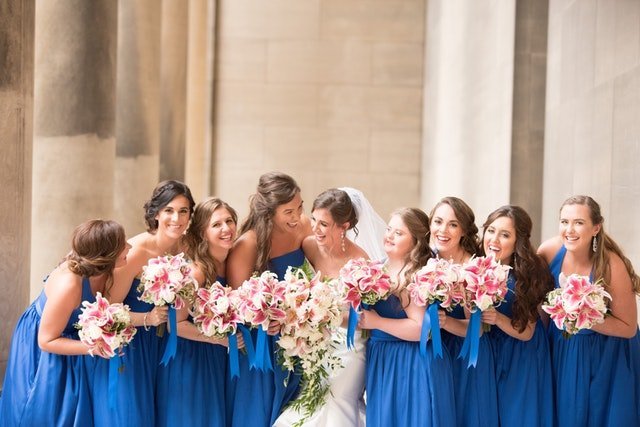 Traditionally the wedding party consists of close family and friends. Although this is regarded as a great honour, it is actually a purposeful role. The role of the bridal party is to help the bride and groom with duties and tasks before and on the day of the wedding. As such, it’s beneficial to have a party that are willing to participate; it isn’t a role for them to simply look pretty (equally, don’t overwork them!).

Maid of honour: Your maid of honour, or matron of honour (if they’re already married), is to help organise the bridesmaids, help in organising the bachelorette/hen party and stand arm in arm with the bride on her wedding day.

Best man: The best man is to keep the ushers in check, plan the stag do, keep the rings safe and of course deliver the best man’s speech. Certainly tamer than the historical role of the best man who would help the groom to steal the bride! 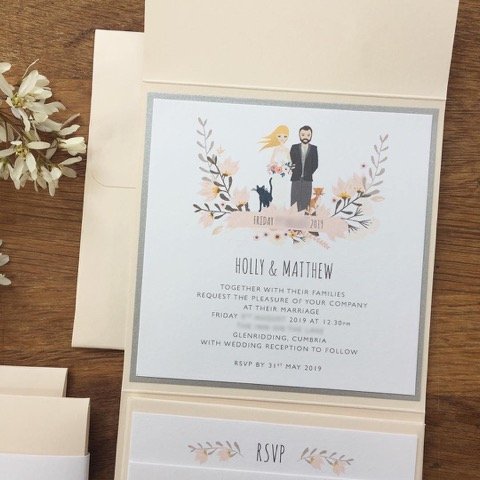 A bespoke illustration by Olive Weddings

Traditions with wedding stationery tend to focus around the wording, which also dictated who sent them and dealt with the correspondence.

Once upon a time the bride’s parents would pay and host the wedding as their last hoorah before passing the bride over to groom to care for her. As was the tradition, their names would feature first on the wedding invites as the hosts of the occasion. More commonly today, the bride and groom pay for their own wedding and as such their names come first. However, it isn’t unheard of to use a combination of the bride and grooms’ parents’ names within the invite as both parties often make large contributions to the celebrations. 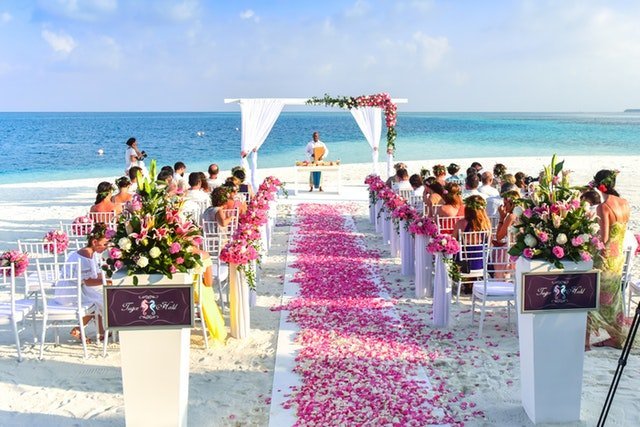 Much of the traditions of the ceremony is determined by the law, however, there are couple of additions that aren’t necessary but customary:

Giving away the bride

The tradition of the bride being ‘given away’, is quite simply that. It was the father giving his daughter over to her groom in exchange for dowry (money or property). This was a time when women were considered a commodity.

We like the idea of the father passing care over to her new partner but the historical sentiment sure does leave a sour taste!

The ring is symbolic of a never-ending union (hence the circle and of course perfect fit!). It also signifies to others that you are wed. The reason we wear it on our fourth finger on the left hand is the Romans believed that the vein in this finger runs directly to the heart (Brides.com)- how romantic!

However, the ring was traditionally only worn by the bride. Sadly, as a mark of ownership. It is becoming more and more commonplace though, as of the 20th century, for men to wear one too. It’s certainly traditional to at least see an exchange of rings to signify the union during the ceremony.

Confetti is an Italian word for sweets (coated almonds specifically) that were thrown at carnivals. This tradition extended to further celebrations, like weddings, where grains, sweets and later decorative segments of paper were thrown. In addition to marking the celebration, the throwing of rice was to symbolise fertility. As it is said to be quite painful to the couple and bad for the birds, paper is traditionally used. However, we’d encourage the eco-warriors in you to use dried flowers instead.

Ever wondered why it was called the wedding breakfast? (Particularly when you seemingly don’t eat until 5pm at some occasions!). It’s because traditionally, the bride and groom would fast the night before their wedding and not eat until they’d wed. In essence, this feast was their breakfast.

The wedding favours are a gift to the guests from the bride and groom as a thank you and keepsake of their presence at this special occasion. It can be anything you want it to be- if you want to give something that is.

Traditions when it comes to the wedding cakes 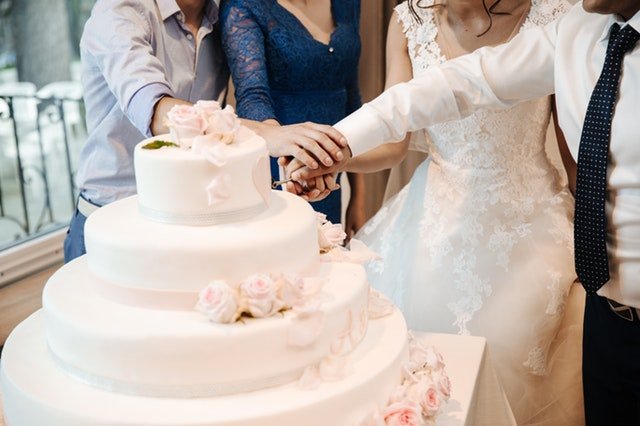 There are a couple of traditions when it comes to the wedding cake.

Traditionally, there would be three tiers in a wedding cake. The bottom tier was traditionally served on the wedding day itself to all of the guests. The second would be handed out following the event, and the third would be kept until the day of your first child’s christening. Though more recently until the first wedding anniversary (whichever came first). When it comes to actual sizes and servings, plus some other great cake tradition titbits, take a look at the Wedding Ideas Mag article of the same title!

Did you know that the traditional filling is fruit? It’s because it can be made well in advance and has a long shelf life!

Kissing over the cake:

In medieval times the cake would be stacked high with the bride and groom attempting to kiss over it. If they did it successfully (without knocking any of it over), it was a sign of good luck and prosperity.

Cutting of the cake:

It used to be a job for the bride but in recent times it has come to be seen as the first task they do as husband and wife. The groom helps his bride to cut the cake.

Feeding each other the cake:

This is something you don’t see very often but we think this is quite a fitting modern tradition.

Once the cake has been cut, you feed a small piece to each other as a symbol of your commitment to provide for each other. It’s cute, right!

The bouquet and throwing it

Everyone knows the tradition of the throwing and catching the bouquet, right? The bride would throw it and whoever caught it would get married next. How this came to be is not known for certain but Wedding Bee has done lots of research on it. In their findings it became more common place in the Victorian era but likely dates back to the Ancient Greeks and Romans. They would wear flower garlands and rub themselves with fragrant herbs to deter bad omens.

As has been since the beginning of time, dance is a symbolic expression. The first dance is one of the most anticipated moments at a wedding. As it shows the unity and love between the newlyweds. If dancing isn’t your thing, you need not worry about superstition as this element is more for show.

Carrying over the threshold

This was another superstitious tradition concerning the Evil Eye that dates back to the Romans.

To prevent evil spirits entering the marital home or bedroom, the groom would carry the bride over the threshold. It was a last attempt to thwart any ill-will from these spirits. Nowadays it’s just seen as a little fun. 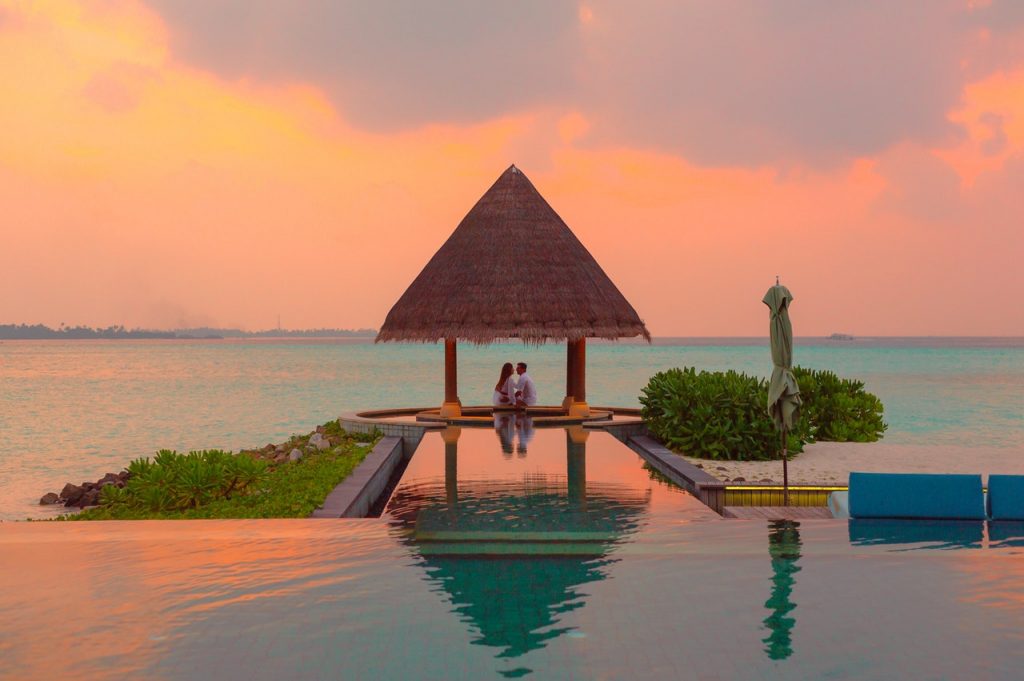 There have been many purposes to the honeymoon over the centuries. Early on it was certainly regarded as an opportunity to celebrate the union and procreate. It’s also an opportunity to spend quality time together after such a public display; it can entail getting to know each other better and sit with the prospects of the longevity promised. In the 19th century, the honeymoon would encompass travelling around to see family members unable to attend the wedding. Nowadays the honeymoon very much is a time of relaxation and luxury following the planning and very public display.

We hope this has proved insightful. Were there some traditions you were unaware of? Are there others you’ve heard of? We’d love to hear from you! Share your thoughts with us in the comments below. If you’re looking for more inspiration to plan your special day, we’ve shared some of our popular wedding pieces below.

Let us know what you think, leave us a comment

Our sponsor of the month, Bonmarché

Finalists for Lifestyle Blog of the Year 2018

Read more…
Thank you for visiting. Just to let you know that our site does use cookies, to find out what that means please see our privacy policy