Review: What We’re Told Not To Talk About (But We’re Going to Anyway) 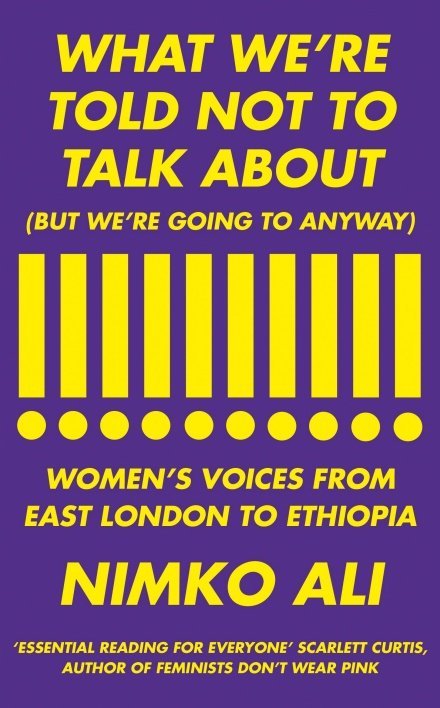 “We’ve had the vagina monologues; now it is time to start the vagina dialogues. Sharing stories and experiences with women and girls, having conversations, is what this book is all about.”

Indeed, this is a book about the big taboo that is vaginas; despite half the population having one.

Nimko Ali’s book, What We’re Told Not To Talk About (But We’re Going to Anyway), is a collection of stories from 42 women in 14 countries who speak openly about their experiences of “their first period, their first sexual experience of pleasure, their search for that pleasure, their pregnancies  –  the reality of it all, as well as everything in between and the menopause”.

She has been campaigning for FGM awareness for years and this book includes numerous accounts of women who have been cut, their experiences, and how it has shaped their lives.

It seems hard to swallow (and it is at times), but from the start, Ali puts a fun twist on her book, making puns, describing the red blood of a period as not “red like the red of the EU passport we’ve lost” and daydreaming a scene where the Secret Service is shopping for Michelle Obama.

“The Secret Service guy would be in the drugstore on his walkie-talkie: ‘Affirmative. Target seen next to the boxes of panty liners. One box of tampons with applicator?’ ‘Negative – Renaissance wants the ones that expand width-ways to fit you better.’”

It does however take a more serious turn when the voice of an 11-year-old Syrian girl tells you how she got her period on the journey across borders and her mum sacrificed her sanitary products for her.

It is the one thing that links us wherever we live, whatever our culture.

Or a mum who gives birth in a refugee camp, surrounded by strangers who don’t speak her language. “The women in France have been nice, but not understanding each other was hard. Have you been scared and unable to communicate your fear? That was the worst, the not knowing what was going on.”

“I’d felt this growling pain in my stomach all morning. I stood up and felt something break inside me – my waters, probably. Then this gush of bright red oxygenated blood just poured out. There was so much of it.’ She remembers sitting on the toilet as the blood ran, while her partner held her hand and kept flushing. ‘Don’t look,’ he said.”

But while 14 countries are represented in the book, I missed a few more Western or mainstream experiences. The point of the book is to talk about what brings us together and a Western European girl may feel just as terrified as a girl in rural Africa, because she has nothing to compare it to.

It seemed like one minute I was a child worrying about exams and toilet ogres and the next I was a woman, with period worms and a husband to find.

So my question: Where is the girl who is the first to get her period and lies about why she isn’t going to the pool with her friends or her (with hindsight) funny first tries of using a tampon, or the lesbian woman (or transgender man!) talking about her first orgasm?

But hearing their voices is stronger than anything I could tell you about this book – from the girl circumcised at 14 and then married off to a man – a stranger – as his fifth wife so he could still have children, to the homeless woman making sanitary pads out of a plastic bag – and Ali has taken the same approach by letting each woman tell her story and framing it at the end with research on each situation or illness, from living conditions or nannies in the Middle East, to labiaplasty, FGM of course, abortion laws and tax.

“It’s bloody incredible that sanitary products are still seen as luxury items. And on top of that, we pay a 5 per cent tax for what the government defines as a ‘non-essential luxury item’. So, here’s a list of some of the things considered more essential than towels and tampons, all taxed at zero per cent. – Bingo – Jaffa Cakes – Kangaroo meat – Herbal tea – Chickpeas.”

And so Nimko Ali, a Somali activist, gathered honest and intimate – almost unedited – testimonies from women in the most extreme situations and I am in awe of how she reached some of these women who seem so far away from anything we know in Britain.