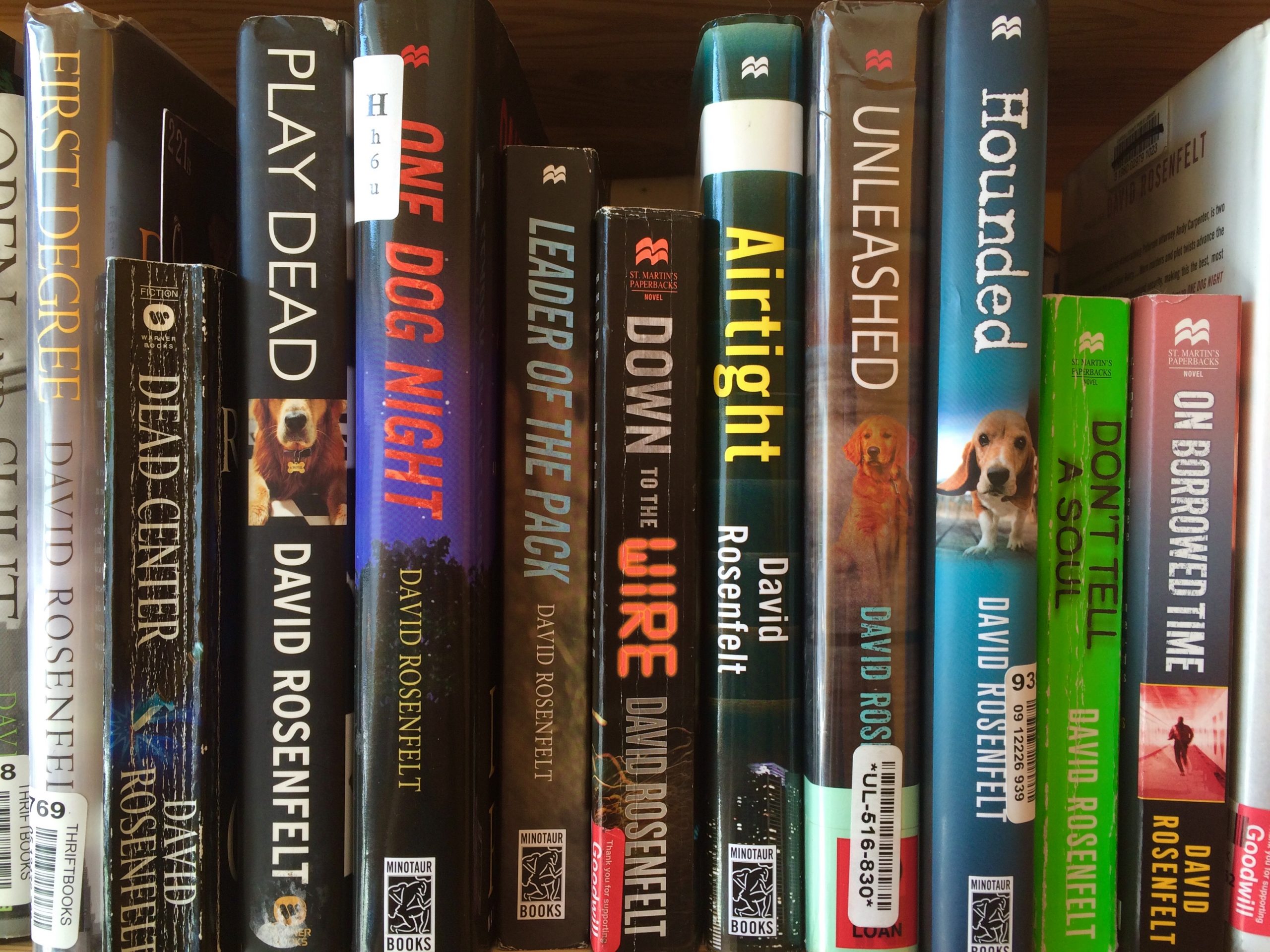 Let me tell you right now: I am not much into crime, thrillers, mystery or courtroom drama. In fact, even as a journalist, I avoid court reporting whenever possible.

David Rosenfelt books are all of the above. And yet I am coming out of a Rosenfelt-marathon weekend. I am hurrying through the books that arrived this week to get ready for the 21st July – the day two more of his books are published.

When I review books, I have a large amount to choose from. Of course, I pick the ones I like. But I also pick the ones that may be less well-known. If they are bestsellers, you don’t need me to tell you they exist; you will already know.
Rosenfelt seems widely unknown in the UK. I have struggled to find his books in shops and had to resign to ordering them.
The one question I cannot answer is Why?

I found one book at a library book sale a few months ago and am now almost through all 19 published books (with two coming very soon!).

So what are they? There are two kinds, the stand alones, and the Andy Carpenter series.

The former are thrillers, one of the only ones I really enjoy, full of tension and apprehension. With Down to the Wire, which also has a brilliantly read audio version, I had chills running down my back. In Airtight, I really was gasping for air hoping for a good ending. And I have Heart of a Killer to look forward to: Sherryl Harrison is in prison for the murder of her abusive husband and calls upon Jamie Wagner to help her commit suicide. She is on suicide watch, but that is not the real issue: She wants to die and be taken into hospital straight away to give her sick daughter Karen her heart; without Karen ever finding out who the donor is.

My favourites are still the Andy Carpenter series – David Rosenfelt at his best!
The art is the way you can laugh out loud in between murders and deadly situations. I have learnt about witnesses being excused from appearing in court if they were decapitated and the head wrapped in cling film and other levels of being ‘unavailable’.

“Can I borrow your pointer? It’s a beauty.”
He would like to hit me over the head with it, but instead he grudgingly hands it to me, and I walk over to the large photograph of Willie in all his scratched glory.
“Be the way, did you find a ruler near the body?”
“A ruler?”
“You know what a ruler is don’t you? It’s like this pointer only smaller, flatter, and straighter.”
Wallace objects and Hatchet admonishes me; business as usual.
Open and Shut, David Rosenfelt

Andy Carpenter is a lawyer in Paterson, New Jersey. Who Let the Dog Out is the most recent book of the series, which is coming out in two weeks. Although the 13 books are of course good to read in order, I randomly started with the eight one and managed just fine.
Andy takes on cases when he pleases – which isn’t often – because in one of the early books he inherits a very large amount of money and is financially set. When he does take one on, it is because he believes the defendant is wrongly accused. The rest of the time he spends with his Golden Retriever Tara or at the Tara Foundation, an organisation rescuing dogs from shelters before they are being put down and finding them new homes. All this happens very early on and sets the scene for the following books.

“Yes, Your Honor,” he says, “we believe that is it a conflict for Mr. Carpenter to be representing this defendant.”
The judge turns to me. “Mr. Carpenter?”
I stand up. “Your Honour, just three days ago, Mr. Campbell stood before you and told you Oscar Garcia was guilty beyond reasonable doubt. We told you he was wrong, and now he admits that he was. Now Mr. Campbell is telling you that it is Laurie Collins that is guilty beyond reasonable doubt. He is wrong again.
Since it is clearly his to keep charging people until he finally blunders to the guilty party, and since there are more citizens in this community than lawyers, eventually some of us are going to be called on for representation more than once. We might as well start now.”
First Degree, David Rosenfelt

Let me just quickly point out that the Tara Foundation is real. Rosenfelt started Tara’s House with his wife fourteen years ago. Andy Carpenter’s Golden Retriever Tara is just as real, and is – from Rosenfelt’s somewhat biased point of view – the best dog on the planet, probably in the universe. His way of celebrating a new book release is to get a new dog. Currently, he lives with 27 dogs and that would probably be Andy Carpenter’s dream as well.

I love Andy Carpenter. Except for his love of dogs I would never be friends with him – he loves football and avoids working when possible – but he makes every trial interesting. For the first time, I am hooked when the judge enters the room and enjoy the long speeches. He has a way of working a court room and the reader gets to enjoy every minute of it.

“I had a conversation yesterday with a mutual friend of ours,” he says,”Judge Henderson. Good man.”
I nod. “Very good man. Outstanding man.”Judge Morrison starts looking through some papers on his desk. “Let’s see … ah, here it is” he says as he finds the paper. “He said you were a fine attorney.”
“He did? Well, he’s a fine judge. Very fine,” I say.
“And he also said you were” -he starts to read from his paper- “a disrespectful wiseass who considers proper court procedure something to trample on and make fun of.”
“Maybe ‘fine’ was too strong. He’s a decent judge. Somewhat decent.”
Dead Center, David Rosenfelt