Review: No Place to Go by Lezlie Lowe 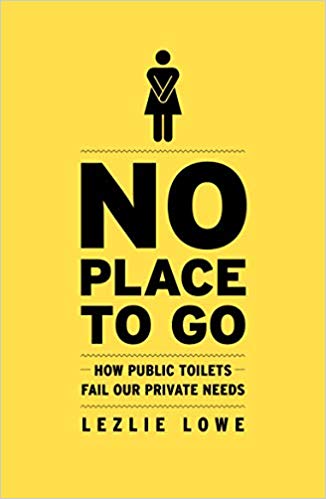 “No place to go” is not a not about a soul searching experience, but rather about a place when you really need to go. In other words, when nature calls.

If you are wondering if there can really be an entire book on toilets, you will be surprised to hear there is more than just one. There are, as I found out, a number of people who made it their life’s mission to research loos. In this case, the lack thereof.

The sell seemed simple – there are not enough public toilets – and we can all relate because we have all been stuck in an uncomfortable situation at one time or another; thus proving the point.

I understand only too well because I am terrified of public toilets (the stench, the size, the filth, and the idea I may not be able to unlock the door and no-one would know. To me, public bathrooms are all the tiny, disgusting toilets in 1990s trains which cause me to automatically mouth-breathe before I even enter a public toilet – even the clean ones! So I rely on places I know well or on holding it in (I’ve had years of training, including a full day at Disneyland when I was a child.).

But, there is only so much you can say about it, and only so much the average person wants to read about toilets. And 200 pages is more than I needed to read.

Some aspects are very interesting, especially at the beginning.  Interesting fact: “Where women get six cubicles, men might get four cubicles plus four urinals. So where square footage for men’s and women’s bathrooms is equal, men usually get more opportunities to go. Cities abound in toilets; not a building goes up without several. But access is selective.”

‘Women, from a very young age, are made to feel like it’s the woman’s fault. Women take longer. Her fault. And you still hear it! I have to keep my mouth shut. There are little girls asking, ‘Mummy, why are we waiting?’ ‘Well, it’s because women take longer.’ Well, it’s not. It’s just that the planners, the architects, the local authorities, the people who license these places, are choosing not to be realistic, choosing not to give the space where it should be given.’

But others seem much more far-fetched than the original idea: Research into toilets for people with disabilities, toilets (and showers) for the homeless and the sanitary situation in sub-Saharan Africa or parts of Asia are well-researched, but make for a very long read.

There are many things wrong in the way we deal with homelessness and third world countries are very different from our developed world, but it doesn’t feel like the right setting to discuss all this.

The structure of the chapters is odd, with titles full of puns, but little information. Informative headings such as “Homelessness”, “On the other side of the world”, “The Gender Problem” may have been helpful in avoiding repetition of topics and also in navigating the book in order of interest.

Hump day? Best day of the week in our opinion! Hea