Review: A Dog Walks Into A Nursing Home – Lessons in the Good Life From An Unlikely Teacher 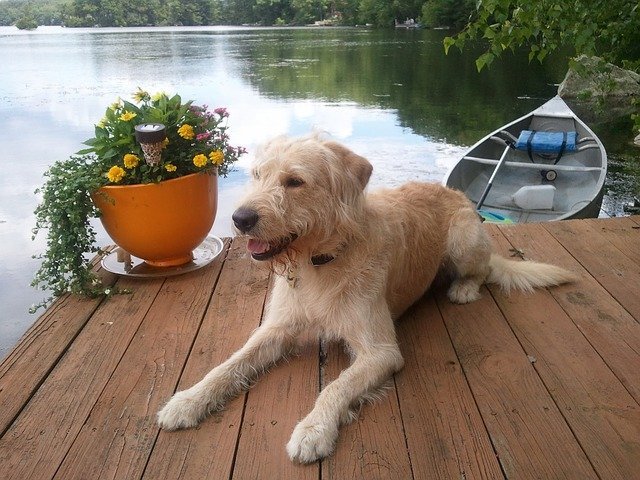 What do parents do when their children leave the house and they are left at home alone? Usually, they will have a little meltdown – we won’t label it as mid-life crisis – maybe pick up a new hobby or try and go back to work. That’s one option. Sue Halpern combined the latter two by having her dog certified as a therapy dog and starting to visit nursing homes with her.

Not everyone has a young dog at the ready though who can still learn and who is the right breed for it. Well, no. And neither did Halpern. Her “Labradoodle” Pranksy was 7 years old and although she had a very kind disposition and liked people, it doesn’t seem like an easy task to get an adult dog with no previous training ready to be a therapy dog. After six weeks of hard work though, they made it. And this is where the story starts.
Halpern entitled her book “Lessons in the Good Life From An Unlikely Teacher” and maybe it is Pranksy who has taught her those lessons, but it is the way she words her experiences, describes her encounters and strings her story together which makes up the lesson for the reader.

“Watching Pranksy jump in bed with a nursing home resident or put her head in someone’s lap, I could see that the love she was sharing was simple and profound.”

The dog is the one showing her love for the elderly people she visits and sees them for “who they are”, not “what they are – disabled, aphasic, blind, mute.” But Halpern is the one drawing on a range of philosophers to explain to us the effect Pranksy has on the residents.

“If the French philosopher Descartes needed an object example to prove his point that mind and body are separate entities, he would not do better than choose Fran. As her body attacked itself, as it wasted away, as it stalled, her mind was as robust as ever.

Fran’s mind was unfettered, and when she was in conversation she could escape her body; she could travel.”

The reactions to Pranksy aren’t always positive, some people just aren’t dog-friendly. Mostly though, the dog can achieve what none of us humans can: Make people feel appreciated and love unconditionally.

“The man was all torso; his legs had been amputated at mid-thigh. I didn’t want to stare. So I focused on his face. Which was oriented dogward and had been hijacked by a big, goofy smile.”

As depressing as it may seem to be around paralysed people, amputees, and ailing, it never is. The descriptions are honest and Halpern draws the attention away from the grey and dismal environment – just like Pranksy – and focuses on the teachings of this experience: Self-restraint, animal emotions, the separation of mind and body and finally what really makes a good life.