Orlando: A dual with wizards, fright night with villains, doused in magic and the best shopping in the world. 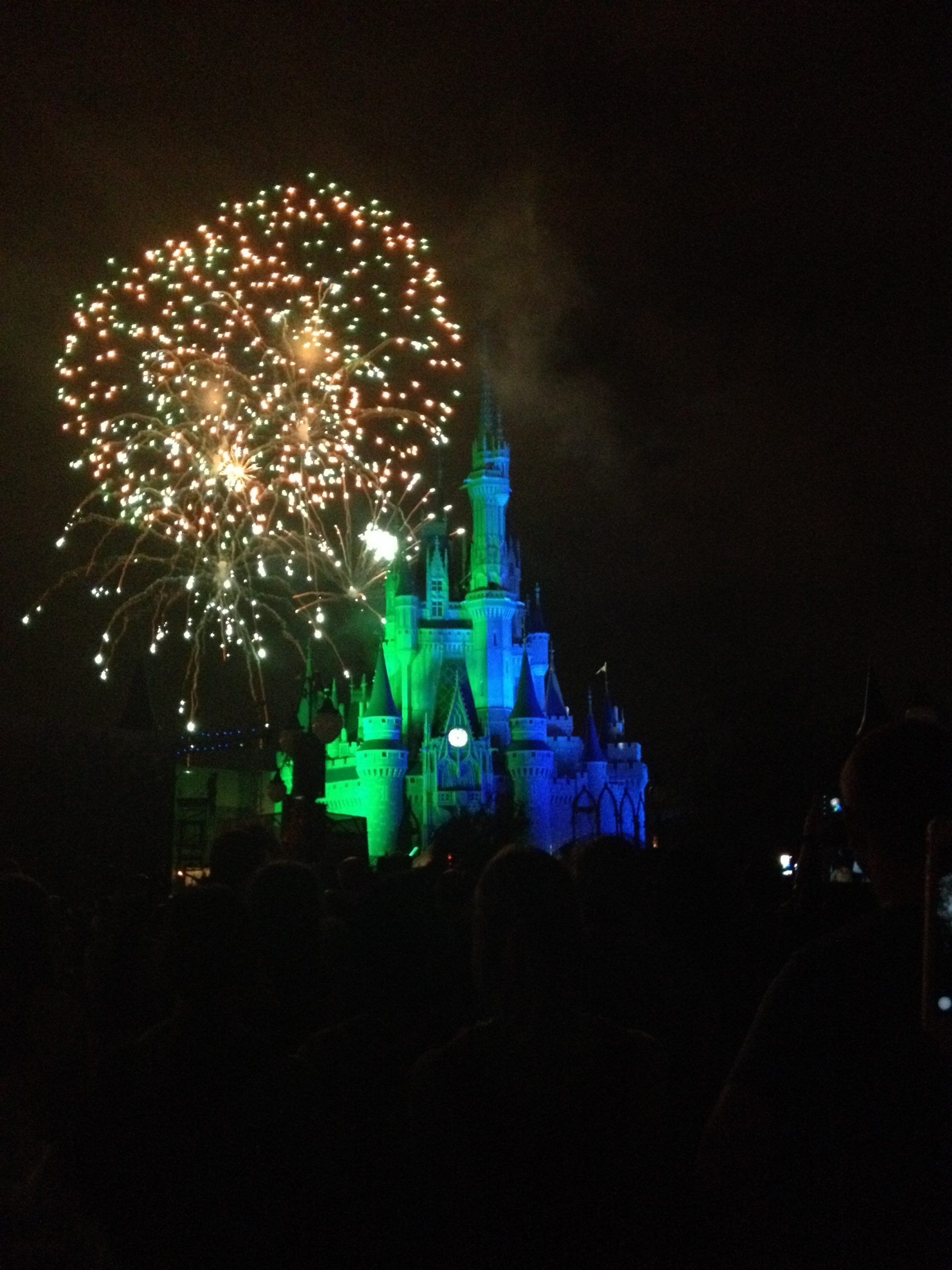 This was my third visit to Florida. It’s a place full of adventures, a feast for memory making and something for everyone; no visit is ever the same, it constantly changes. 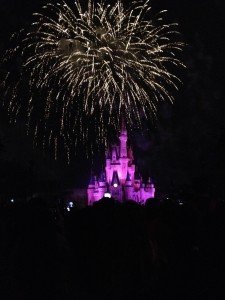 Aside Disney, which is a massive crowd-pleaser alone, Universal’s Wizarding World of Harry Potter is equally magical. It’s like I’ve seen this place grow into the spectacular it is today. When I first went (2009), they were just building the castle and Hogsmeade. It was in 2013 when I was working for Disney that I got to explore the village and the huge attractions, Harry Potter and the Forbidden Journey, Dragon challenge (formerly Dueling Dragons) and Flight of the Hippogriff. In 2013, Universal announced  it would be expanding the Harry Potter World to include Diagon Alley and a full scale, fully operational, Hogwarts Express which would allow access between the Diagon Alley and the Village of Hogsmeade (dual park passes required!).

Today, the park is incredible and worth visiting Universal alone. The two days I spent at Universal on this trip were spent (almost solely) at the Wizarding World of Harry Potter. I’ve been fortunate enough to go the studio tours in Watford, London as well as the theme park in Orlando. Each experience is unique and absolutely worth a visit. I will say, the perk of visiting the theme park in Orlando is you can fully immerse yourself in a true Harry Potter experience. Many dress up for the occasion in robes which can be purchased on site or in themed t-shirts and other memorabilia. Interactive wands can be purchased so you can create your own bit of magic in various locations around the parks, you can dine at the Leaky Cauldron, Three Broomsticks and the Hog’s Head and even enjoy 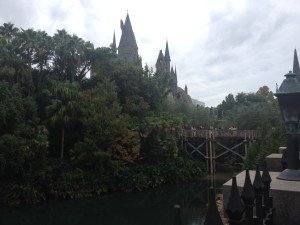 Hogwarts School of Witchcraft and Wizardry

your Butterbeer hot, cold or frozen at each restaurant and other, various locations around the parks. The bigger, signature rides- Harry Potter and the Forbidden Journey (inside the Hogwart’s Castle in Islands of Adventure) and Escape from Gringotts (within Gringotts Bank, Universal Studios) appear fully interactive so you feel a part of Harry’s, Ron’s and Hermione’s deadly adventures against He-Who-Must-Not-Be-Named as witnessed through film and books. But the adventures don’t stop there. Why not try the unique flavours of ice-cream in Fortescue’s Ice Cream parlour in Diagon Alley (I particularly recommend the chocolate and raspberry flavour), pick up a chocolate frog or Bertie Bott’s Every-Flavour Jelly Beans from Weasley’s Wizard Wheezes or HoneyDukes/Zonko’s Joke Shop, pay a visit to Ollivander’s where you might be selected to find your perfect wand (mine was Birch) and if you’re interested in the Dark Arts, than Knockturn Alley, just off Diagon Alley, is just for you- pay a visit to Borgin and Burkes for your fill of dark magic! It doesn’t stop there either. In Diagon Alley there are stage shows of The Tale of The Three Brothers (Beedle Bard) and performances from Celestina Warbeck and over at Hogsmeade the Hogwarts Choir have regular performances too! 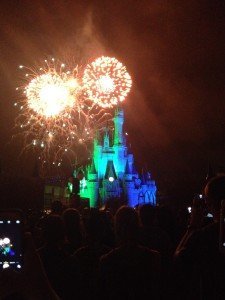 It’s incredible the efforts that have been made to have this fully interactive Harry Potter experience. Even before you enter Diagon Alley, you get to see the Knight Bus and pay a visit to Grimmauld Place where sneaky Kreacher lurks! Even when approaching King’s Cross station to board the Hogwart’s Express, you’ll have to walk through the wall to get onto the platform. Once aboard the train, it’s an experience in itself which does move and transport you to the village of Hogsmeade.

Then you have Disney on the other hand which is truly is the most magical place on earth. I’ve been fortunate enough to have worked for the Walt Disney World company in Orlando in 2013 so have had more than my fair share of my time at Disney. However, I can never get enough. Every visit is as magical, if not more so than the last. For me, the most magical aspect of Disney is their firework displays, I’ve got a bit of a thing for fireworks as it is, I just find them mesmerising and beautiful, Disney spare no expense in their displays, any other professional display you have seen prior to a Disney display is mediocre in comparison. As you’d expect. Disney perform their iconic display, Wishes, almost nightly. When it isn’t on, it’s usually because they’ve got another treat in store such as their Independence Day display or, as I got to witness on this occasion, their HalloWishes. It finishes of a most magical day spectacularly. 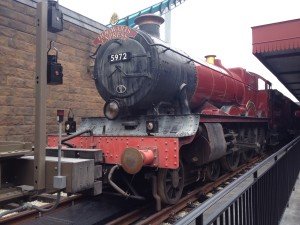 I highly recommend going along to Mickey’s Not so Scary Halloween Party if you ever get the chance/you can tie it in with your visit to Florida time wise. Tickets are $69 upwards. BUT. You can go trick or treating (yes, even adults), there are special parades, shows and fireworks- all of which are phenomenal! and what’s more, everyone makes such an effort in dressing up but even if you don’t (I didn’t as didn’t know until I was arriving in Florida that we’d be going), it doesn’t matter. If any of these reasons don’t encourage you, this might. It is THE BEST chance you’ll have to meeting all the characters, including the villains. Almost every character will be out and about waiting to have their pictures with you and the queues are the shortest you’ll ever see and that includes the rides!

With 4 Disney parks (Magic Kingdom, Hollywood Studios, Epcot and Animal Kingdom) you could spend your entire holiday going in and out of these parks alone. However, there is so much more to see and do. Disney also have two water parks (Blizzard Beach and Typhoon Lagoon) and Downtown Disney where you’ll find shops, restaurants and special  shows including a specifically created version of Cirque Du Soleil. 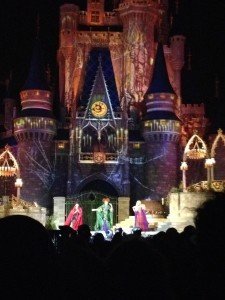 Disney’s not so scary Halloween Party, the Sanderson Sisters are back!

Outside of Disney World some of the biggest attractions are: Universal Studios and Universal’s Islands of Adventure, SeaWorld, Busch Gardens, Aquatica water park and Wet ‘n’ Wild water park. I’d highly recommend an Orlando Flexi-pass which permits entry into some of these large attractions over a 2 week period, unlimited entry with prices from £207; it’s exceptionally good value for money. Disney also do a multi-pass where you can get a 7 day pass, 14 day pass or 21 day pass from £255 upwards. It’s often a competition between the two as to which is better for value.

There is another aspect to Orlando that gets me every time! The outlets. You’ve never experienced outlet malls like it before. We find that we get THE best discounts at the outlets, generally can’t be beaten on price. Most of the time I threaten to take an empty suitcase as there is so much I’d love to buy, though do remember that you are limited on how much you can bring back into the country tax free. To find out more about the outlets check out our post Shopping Duty Free.

Personally, I recommend a two week trip to Orlando, if you can, it does mean you get to see an awful lot if not it all! But trust me, it’s a place you’ll want to visit again and again and again. 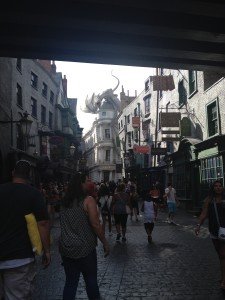 Getting there: Virgin Atlantic flies twice a day to Orlando from London Gatwick. Economy fares start from £515 including tax. For more information call 0844 2092770 or visit www.virgin-atlantic.com.

Villa rentals- Great for families and larger groups! You can divide the costs between your room (how about cost per room).

Where to eat- It’s always an experience to eat in America. In Orlando, I’d personally recommend: :

Manny’s Chophouse– it’s a drive but it’s the best steak you’ll ever have!

Wolfgang Puck’s Express– best. fries. ever. and the Ceaser Salad and the pizza. You’ll find Wolfgang’s at Downtown Disney

Be Our Guest- if you’re a fan of the movie. You’ve got to go whether breakfast, lunch or dinner. Can be found at Magic Kingdom

Lonestar Steakhouse– for the best experience of an American burger! Can be found near the Outlets on Vineland Avenue. 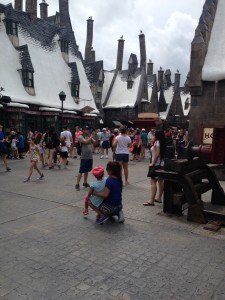