New Orleans: Where jazz flows all the way down the Mississippi river. 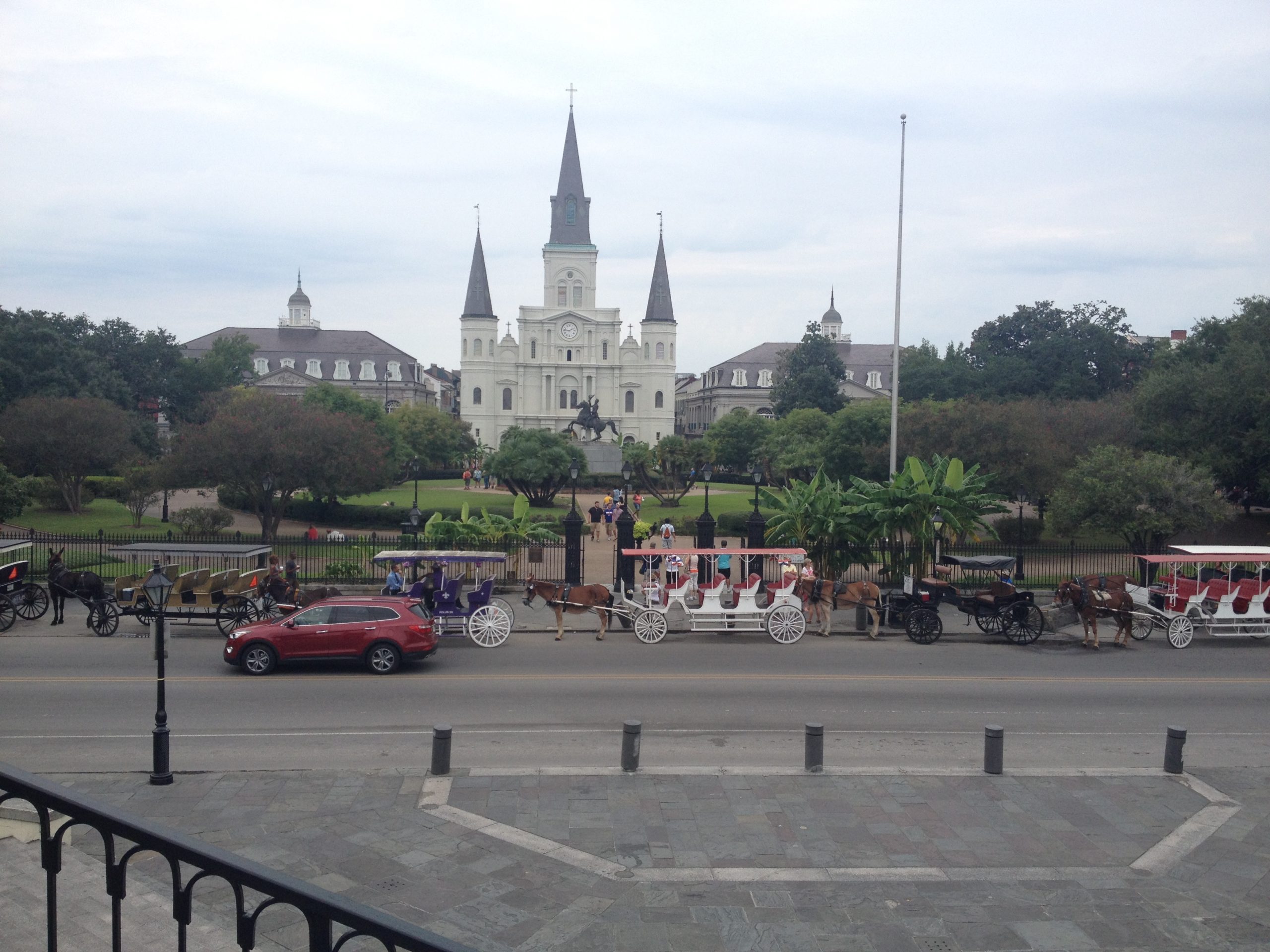 New Orleans is a place where you can experience so much by doing very little. I had only a limited time in this interesting city, 1 whole day in fact, but even in a day here you can learn and discover so much. Having not booked anything in advance and preferring to experience things in company, I spent much of my day wondering around the French Quarter, Jackson Square, strolling along the Mississippi River and taking a tour of St. Charles Avenue by streetcar. Of course a visit was worth nothing without experiencing New Orleans famous beignet cakes at the famous Cafe du Monde, sadly on this occasion I was unable to try Gumbo (a very famous spicy pot dish) though I hear that the Gumbo Shop (aptly named) is the place to go to sample this dish synonymous with the city, located in the French Quarter. 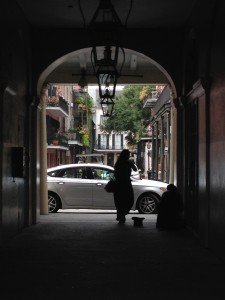 It’s uniquely pretty place with wrought iron railings, architecture reminiscent of its French, Spanish and American influence, gas lanterns adorning doorways and coves and it’s green aesthetic. It is a city famous for séants, voodoo, highly decorated cemeteries, steamboats, cuisine and jazz. Tour’s are highly recommended, the picks below are depicted from locals recommendations as well as experiences of my own, as you’ll uncover a mass amount of the city’s history and notable landmarks. Though if your budget it tight, a wander will still uncover so much. One of the many tourist information centres located around the city offer maps of the various walking tours that you can conduct yourself with highlights of memorable landmarks, ‘celebrities’, historical facts and other locations that are noteworthy. 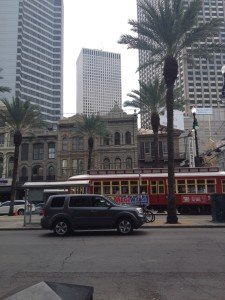 The City does come with a warning though. So many people were concerned about me taking up this particular endeavour alone. New Orleans, at least since the devastation of Katrina in 2005 (speculated by the residents of the city, having only visited this city once, I can’t possibly fathom what it was like before), has left many of the citizens without a place to live. As such there is a mass amount of people that live on the street and is pretty hard to turn a corner without being subjected to someone sleeping, striving for food, or busking on the streets to try and make a living. Though it is not the homeless that are to be feared per se, though do play caution to those that live and earn on the street (if you are going to donate your money, ensure you have it out ready, do not fiddle with your belongings in public), it is the residents of Bourbon Street that I would play most caution to. Friends concerned about my trip into the city came and met me for lunch and to ensure I got a complete New Orleans experience, took me on a tour of the famous Bourbon Street. No sooner had we turned onto this street did we see trouble break out, note it was 2:30pm in the afternoon. Two men seemed to have had a little disagreement before a fight broke out between the two and one set a dog on the other to ‘kill him’.  Although we were in no particular danger ourselves, this is, apparently, a common occurrence along this particular area. My friends often come to the city and party along Bourbon Street, they just recommend vigilance and to venture out in larger groups for safety.

Where to stay: Lafayette Hotel on St. Charles Avenue. The rooms have been recently renovated and are comfy and luxurious without an expensive price tag! Extremely reasonable, though lacking in facilities (it’s a room only kind of hotel) it makes up for it in character, lovely people and great locality (a short distance from chaos with access to the French Quarter by streetcar).

Getting around: Streetcar is the only way for a true New Orleans experience. Ask for an all day pass which is just $3 and allows you to hop on and off any of the streetcars operating in the area. Hop on board and take a tour of the city like no other. 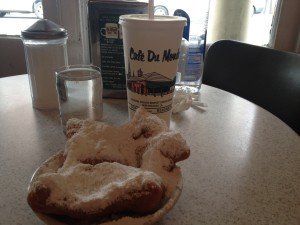 Where to eat: New Orleans is famous for beignets. Not sure that is? It’s basically like a french donut coated in powdered sugar. Unusual but well worth a try. Cafe Du Monde in the French Quarter is legendary. A little cafe where they serve only beignets and drinks, very popular, quick, and pleasurable service. Looking for something a little more wholesome? Head to Muriel’s just off Jackson Sq. It’s quintessentially New Orleans with Jazz playing and very much has a Tiana’s Place vibe (look up Princess and the Frog if you’ve no idea what I’m talking about!).  It’s also got a rich heritage, a resident ghost and food to die for.

Take a voodoo and cemetery tour with New Orleans historian Robert Florence and uncover the mysteries surrounding voodoo and rich history of the New Orleanians buried at St. Louis Cemetery; an above ground burial site.  Tours occur daily with prices for an adult at $20. To book online take a look at Tour New Orleans.

Guided tours include uncovering New Orleans history, touring the mansions on St Charles Avenue, cemetery tours (dependant on times of days and seasons) and venturing into areas still devastated from the 2005 Katrina Hurricane are highly recommended for an all-encompassing experience. Grayline offer SuperCity tours of this variety with several departure options and includes pick up and drop off at your specified location. 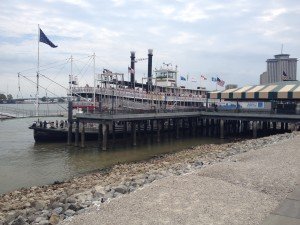 Steamboat Natchez is the only steamboat left here in operation. The steamboats themselves have a rich heritage here in the city.

Hop on the streetcar- you’ll see so much, though you may not always know what you’re looking at. Still an experience and a very inexpensive one at that! There are four routes that you can take. Timings aren’t an issue as they are quite frequent but I recommend checking out the RTA site for maps and times if you’d like detailed information. To find out more about the history and specifics on the different routes, check out Explore New Orleans.

Take a walk amongst the Garden District. One of the oldest areas of the city that happens to be home to some of the most exuberant. The houses here reflect the wealth of the city; with grand hotels, mansion homes and the best restaurants (Commander’s Palace is said to be iconic!). Pop along to the tourist information centre, just off Jackson Square and pick up a free self-guided walking tour.

Take a cruise along the Mississippi on steamboat Natchez with live jazz pianist or trio; dinner and lunch cruises are available as well as cruise only options. Steamboat Natchez has been in operation since 1975 and is the ninth to be christened with this name. She is the only of her kind still in operation today.