Scroll to Top
Share with your friends or save for later...

We know it’s a life threatening condition and we’re often told to watch out for the signs and symptoms but just what is Meningitis?

In simple terms, meningitis is the inflammation and infection to the lining of the spinal cord and brain. There are two strains of the infection, viral and bacterial.

Bacterial meningitis is the infection which is life threatening. Though rarer, as the symptoms for both viral and bacterial are the same, it is imperative a patient seeks immediate medical attention if they exhibit any of the symptoms for full diagnosis to ensure the best chance of a full recovery. The symptoms may be indicitive of sepsis too, a life threatening blood infection, which further strengthens the point to seek help.

As the terms suggest, meningitis is caused by the bacteria or viruses that reside in our nose, throat and/or intestines which may or may not make us ill. It can also be caused by the transmission of bacterial or virus infections in the following ways:

It is if/when such infections spread to the tissues which surround the brain and spinal cord that cause meningitis of either form.

Which means that meningitis could affect anyone of any age.

The Signs and Symptoms:

This is the bit to ingrain in your brain, pin up somewhere where everyone can see it and tell the world! The more people that know the signs and symptoms of this life threatening infection, the best chance they have to survive and make a full recovery without any long term side effects. 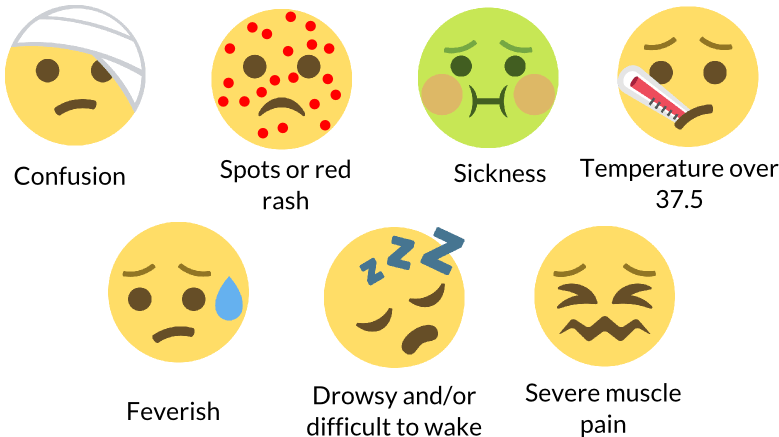 If someone is exhibiting any of these symptoms, seek medical advice immediately. Bacterial meningitis can kill in hours. DO NOT WAIT FOR A RASH. If serious, call 999 or head straight to your nearest A&E department. If you want advice, call your local GP surgery or 111.

Meningitis Research Foundation want a world where we don’t have to worry about meningitis or sepsis. They’re conducting groundbreaking research in this area to create new vaccinations, raise awareness to those that can effect change and what to do when the infection strikes to ensure we get the best treatment we can to ensure complete recovery. They also support those affected by meningitis directly. They don’t just do it for the UK either, it’s all over the world. With their head office in our local city Bristol, you can support this amazing charity by participating in events, help them to fundraise or even just making a simple donation. Their website also has an abundance of resource on this subject matter from learning more about meningitis to how to move forward once affected by it whether you’re the patient or a relative of one. You can also find out about the incredible research that they’ve conducted, what they’re working on and other such information. Do take a look and share. Raising awareness is just one simple way to help tackle this disease which affects so many around the world.

It’s really important to support the work that they do. Meningitis is a life threatening condition so the more research and awareness we can do the more lives we can save.

We’re just scratching on the surface here. There are many strains and variations of the infection as well as immunisations that you can research too. We’d highly recommend looking into this subject and that of sepsis at greater length. Take a look at Meningitis Research Foundation to find out about the amazing work they’re doing to rid the world of meningitis and sepsis; NHS site for further information and advice and Meningitis Now for further information on the different strains, further details on the symptoms and what they’re doing to help many affected by meningitis.

Our signs and symptoms checker was created using Emojione

Let us know what you think, leave us a comment

Our sponsor of the month, Bonmarché

Finalists for Lifestyle Blog of the Year 2018

Read more…
Thank you for visiting. Just to let you know that our site does use cookies, to find out what that means please see our privacy policy