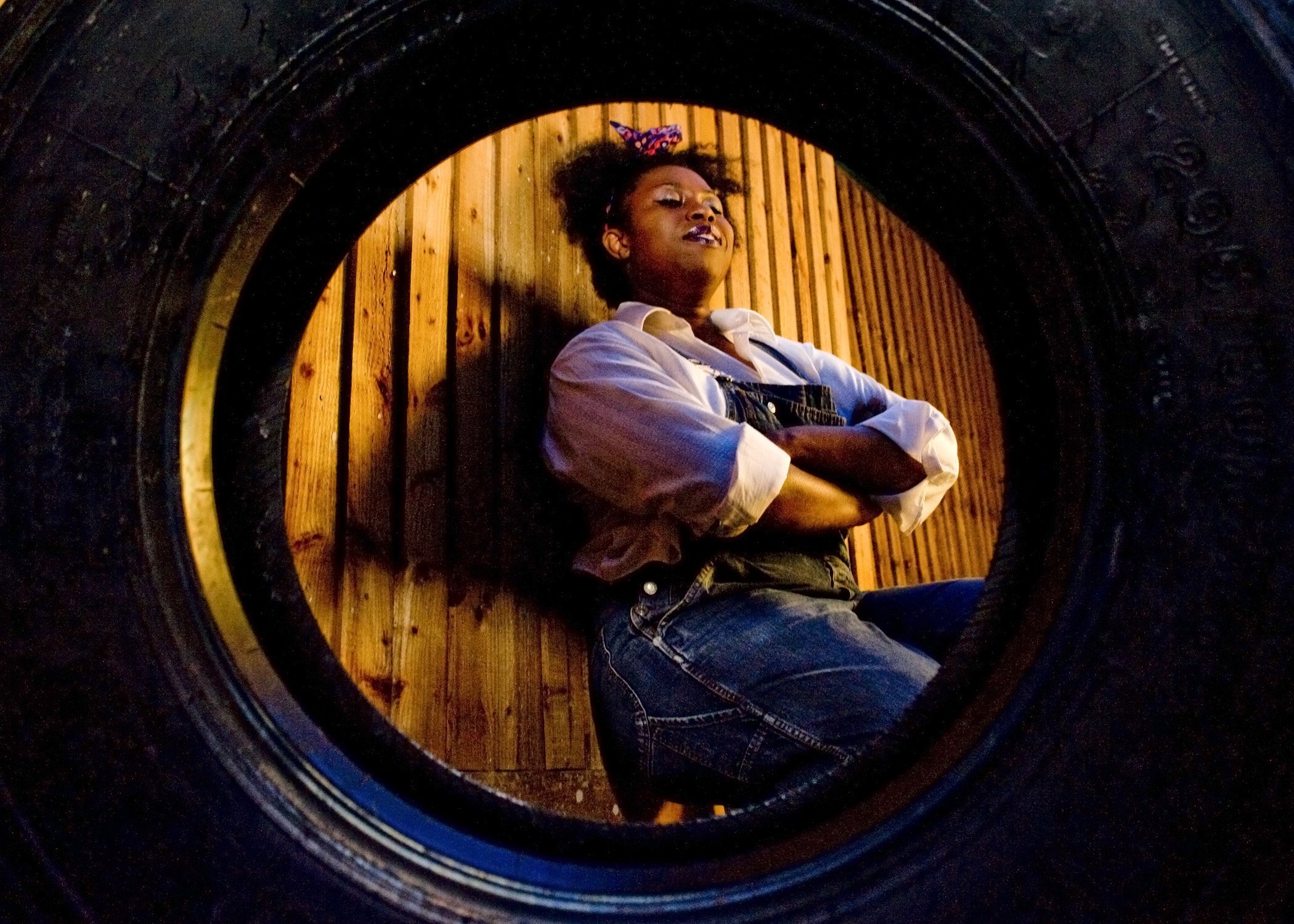 We do love to feature pioneering women on Anything Goes and we’re thrilled to welcome guest writer Nathalie Selvon-Bruce, Business Owner at Buttercup Bus Vintage Campers to share her experience of working in a male dominated industry; driving change to encourage the next generation of women to pursue a career in the STEM industries.

I am a female entrepreneur that has been working in the motor industry for 9 years, hiring our fleet of seven vintage 1970s VW campervans and beetles from Croydon, on the South London / Surrey border.

I can often be seen in my hoodie, sporting hands covered in engine grease, and jeans splattered with car wax – but I am also known to wear dresses and polish my nails! Just like any business owner, I work hard alongside my team but I am definitely not “On it like a car bonnet”, as listed on the urban dictionary as being literally all over something, like an (Essex) girl on a car bonnet”. 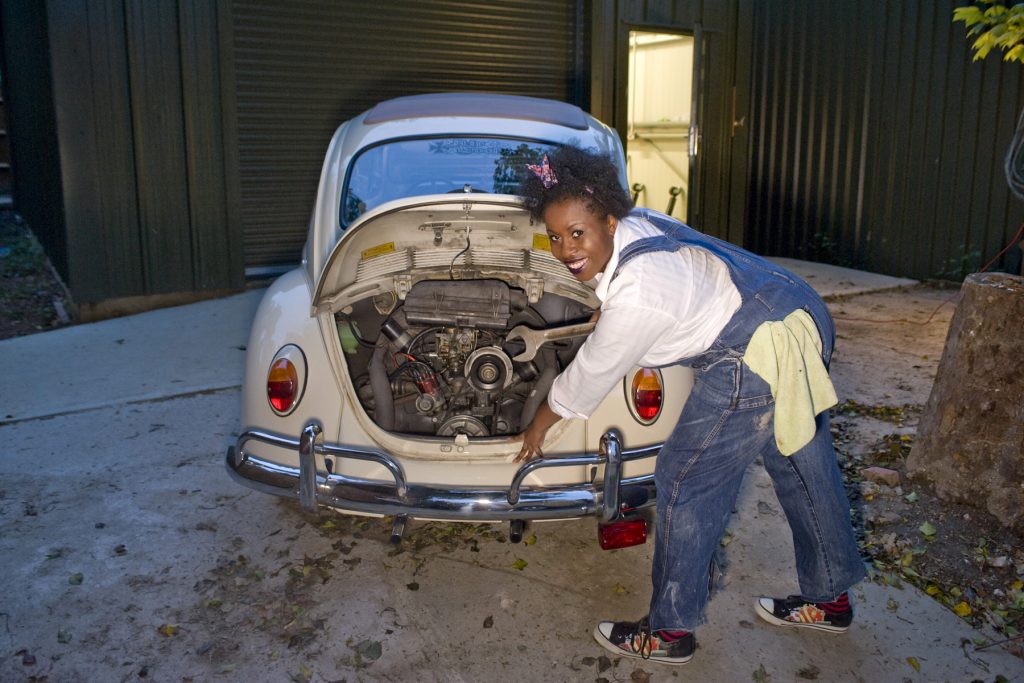 It’s phrases like this, and degrading images that regularly pop up in my social media feed featuring pictures of women, scantily clad, draped over cars (in an attempt for businesses to gain social media followers), that inspired a photoshoot at our workshop. The shoot is with one of our predominantly female team, working on our vintage VW Beetle, but still being a stylish, independent female and indeed wearing stylish clothes at the end of her shift. These images were taken to show that there is a place for women to work in this industry alongside men – gender should not matter!

Our team work in a male dominated industry, with only 20% of women working in transport and storage and just 15% in the wholesale, retail and repair of motor vehicles. (Labour force survey, Aug 2017). Whilst the industry is starting to shake up its approach to marketing, International events like the 2018 Geneva Mototrade show still hosted stands with “booth babes”… and the GrandTour Amazon TV series (featuring Jeremy Clarkson) aired an episode which included a “Grid Girl” posing at the finishing line. Exposure like this can only exacerbate the situation, as it clings onto a dated image that does not reflect the modern, independent, educated woman looking to be taken seriously and provided with equal opportunities and remuneration to rise in the industry. 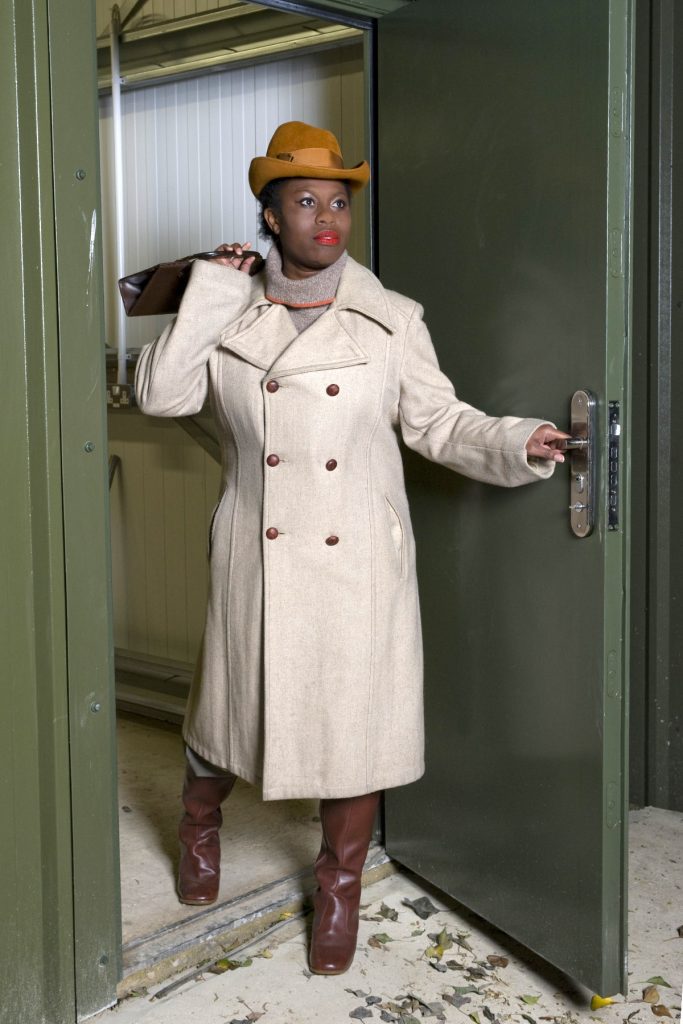 As a mother with two young daughters, it got me thinking about the future, schooling, and the opportunities for young women. I do not know what industry my children will want to work in – but I know that role models can be a powerful influence – be that recognising industry leaders, or normalisation by seeing images on media such as Instagram, television or magazines.

Leena Gade strikes me as a great example – not a typical name to appear in the news – but she is a British race engineer with an impressive career. In 2011, she became the first female race engineer to win the 24 Hours of Le Mans. In 2012, she won the FIA (the governing body for world motor sport) World Endurance Championship’s ‘Man of the Year’ award (the irony!) and the C&R Racing Woman in Technology Award. She is also an Ambassador of the FIA Commission for Women in Motorsport.

Action is being taken, and indeed it is the International Women in Engineering day on 23rd June this month, celebrating outstanding achievements of women engineers throughout the world – a great opportunity to highlight some brilliant female role models to the next generation of students… and in the motor industry, this could not be more timely, as we look to the future of electric cars – an opportunity to work as a pioneer in new technology. 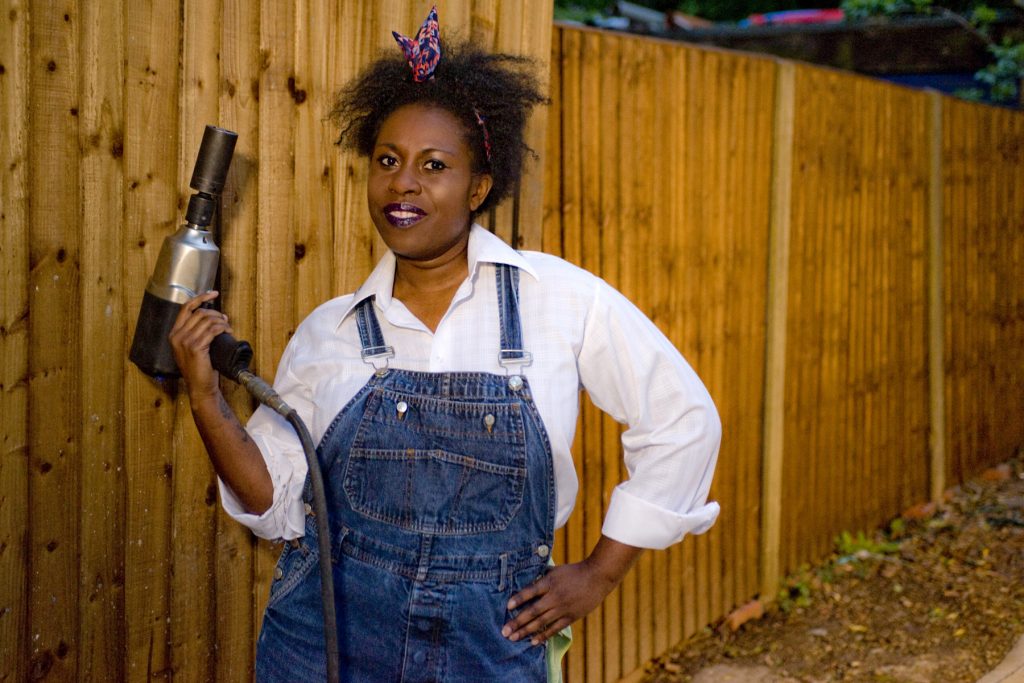 But until the degrading catch phrases and promotional imagery stop, and more role models in the engineering industry are celebrated, it will be difficult to attract more of the new generation of women onto traditional STEM courses (science, technology, engineering and mathematics) and indeed women will continue to struggle to develop a successful career in the vehicle industry, as they battle to be taken seriously.

Let this be the end of phrases like “Women drivers!” ….. there are women out there who can stand tall, working alongside their male colleagues in the industry …  this is no time to be sitting on car bonnets twirling hair – us women have got work to do!