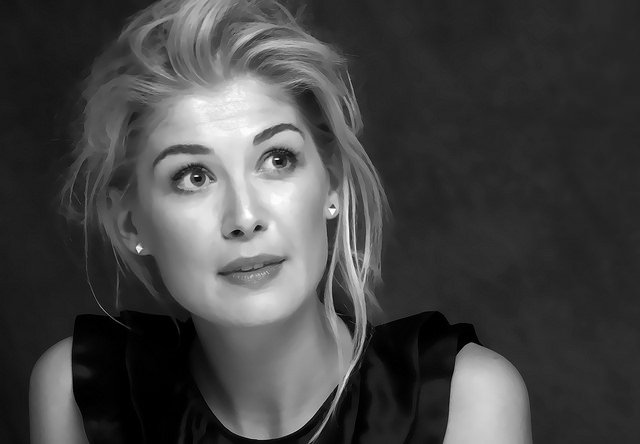 After the book sold over two million copies in its first year, was on the New York Times Bestseller list for two months and shortlisted for the Women’s Prize for Fiction, it wasn’t surprising that the film was nominated for four Golden Globes and two BAFTA Awards. This last Sunday, Gone Girl actress Rosamund Pike was nominated for an Oscar for a role in the film adaptation.

Gillian Flynn published her thriller in 2012 and two years later the film was released.

First of all, it is  important to say that usually you are one of two types of people: Those who take books by the letter and compare any film word by word and those who can see them as two separate works. I am, maybe unfortunately, part of the former group.

Gone Girl is very similar in both book and film, which makes it difficult to enjoy both.

You will probably have heard from somewhere or read or seen yourself that Gone Girl is the story of the disappearance of Amy Dunne on her fifth wedding anniversary. Her husband, Nick, returns to their home to find her gone and signs of forced entry.

The story is told, alternating between Nick’s point of  view from the day of the disappearance and old diary entries from Amy of the time they met. The police starts investigating and even though Nick’s story says nothing to that effect, they find evidence incriminating Nick.

The first few days of the disappearance are long and detailed, with Amy’s memories and Nick’s account. Except for the occasional doubt whether Nick or Amy may know more about the incident than they let on, it is 200 pages (Part One) and 40 minutes of description with little action.

Of course, the story, the thriller, starts when we find out that Amy is alive and well and staged her own disappearance. The amount of detail in which she prepared her stunt and the mind games that happen next are what make the book – and film – a real thriller.

I am neither an author nor a producer or director so I only feel entitled to criticise from a reader and viewer’s perspective.

The reason, I believe, the book and film are acclaimed is the story. If Gillian Flynn hadn’t written it, it would have seemed unthinkable. Twists, turns, shady characters, no idea who (or what) to believe, a story that never seems to end and a truth that just. Won’t. Come. Out.

No debate possible, it takes your breath away and makes you sit upright in your cinema seat, you cease to munch popcorn, you read Part Two in one sitting.

As always, there are small differences between the book and the film. 400 pages can’t fit in two hours and not everything can be adapted in a film the way it is told and laid out in writing. Knowing Flynn wrote the screenplay for the Gone Girl film, means we as bookworms can’t argue whether she would approve of the changes and variations. She added the marriage proposal scene to the film herself.

Overall, the discrepancies are small: one clue is left out of the scavenger hunt, Nick’s father is hardly shown in the film, characters are omitted and, of course, the ending.

The fact that the two versions of the story are so similar, makes it hard to enjoy both. In one or the other, you are bound to wait for the ingenious twists to occur and bored while the back story unfolds.

While the book offers more detail, a more in-depth struggle to believe in Nick’s innocence when the incriminating clues are discovered, more run-ins between Nick and his father and elements on Amy’s antics and pathos, half the book is spent setting the scene and overall, the film handles it a little quicker and works up to the shocking turn.

The only downside to the film is that it has tried a little too hard to include some gory scenes. Desi’s death is much less cruel and graphic in the book and yet just as effective. This remains the power of the written word.