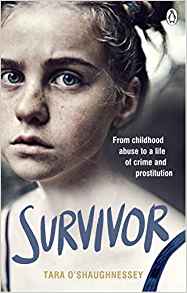 “I was born on 4 January 1972 on Alderney, one of the Channel Islands. My father was Patrick and he left when I was two years old. I raised myself from then on, because my mother was no good at it.”

Thus starts Tara O’Shaughnessy’s life and the book which will take us on a 40-year journey from the baby born in Alderney to the woman she is today.

There will be shocking revelations early on, sad truths, insights into a “gangster life” most of us only know from films, and hints that things turned out ok in the end.

“One of his hands snaked around the back of my head and his other hand removed the towel from his erect penis. He told me to open my mouth and pushed me down over the penis.

It had been there for a long time – at the back of my consciousness somewhere, buried, lying dormant. This wasn’t the first time I’d had to suck Bruno’s penis; I realised I’d been doing it since I was four years old.”

Leaving her abusive stepfather behind, 16-year-old Tara leaves for London, where she becomes a pole dancer. To us it may sound sad, but to Tara, it was a kind of liberation, a way of being in control and it became who she was.

Drugs, crime, homelessness, abusive husbands, prostitutions and gangster husbands – with the help of co-writer John F. McDonald we follow Tara’s life chronologically. This is when the storytelling takes a turn; I went from feeling sympathy for Tara’s harsh start in life to struggling to understand her choices when it came to drugs and crime.

“We made about £600 altogether. Later that day, the woman came to Janet’s. ‘I got robbed last night.’ ‘Oh, no! It must’ve been those people from the pub.’ We consoled her and took her home. While we were there, I robbed her again.”

Some situations are shocking, and sadly true. Hearing how charges against abusive and dangerous husbands disappear or are dropped so easily is terrifying, especially after getting a first hand account of what life is like under his thumb.

But the story becomes long and tedious, and at times it needs a clearer focus, zooming in on key situations and describing the full picture rather than going through every detail.

It seems the authors are aware of it when we read sentences such as “Now, I bet you’re saying: ‘Here we go again’ – and you’re right. There I went again. After only a month together, we decided to get married.” and “But you know what I’m going to say next, don’t you?”.

I almost forgot about the 20-year Valium dependency… because it was only mentioned in passing, when in fact it was a daily occurrence and something well worth discussing.

“My children had never known me not to be on Valium – how shocking is that? They’d go and fetch them for me from my bag, just as if I was asking them to get me an aspirin. But it was just a normal part of the daily routine for me, like having a cup of tea in the morning.”

After the ordeal of forty years, Tara turns her life around and that’s when some of the most harrowing parts of her story are told. But the book is called Survivor because and Tara has an important message she wants to spread. “I’d like this book to be a source of inspiration to women – and men – who have lost their way in the world. I hope it’s something they can find confidence and a way forward from reading.”